New Horizons during the krotic flyby has accumulated about 7 gigabytesoin data, including images, spectrometer readings or radio listening. The data submitted helped update knowledge of Ultima Thule. Preliminary analysis of the data also showed that wokoł object has no rings or larger satellitesow. No evidence has been found eitherow for the existence of an atmosphere.

– The first exploration of a small Kuiper Belt object and also the most distant exploration of any object is history, but almost all data analysis is yet to come, said Alan Stern of the Southwest Research Institute working on the New Hotizons mission.

Ultima Thule is a so-called. sub systemojny contact – Two spherical objects thatore made contact and merged with each other. In appearance, the whole thing resembles a reddish snowman. The unusual appearance of the object sheds light on the processes thatore formed the planets and the entire solar system four and poł billion years ago. Researchers have named most of the object Ultima. It is about twice the size of the smaller part named Thule.

Ultima Thule orbits in the heart of the Kuiper Belt in the outer Solar System, far beyond the orbit of Neptune. Kuiper belt extends from 30 to about 50 astronomical units (astronomical unit – Astronomical Unit is approximately the distance separating the Earth from our star. About 150 millionoin kilometero(w) from the Sun. It consists of many icy and rocky objectsow with sizes ranging from dwarf planets like Pluto to smaller asteroids like Ultima Thule and even smaller bodies like comets or tiny remnants of the Solar System’s formation process.

The following images were taken from a distance of about 27,000. kilometerow. Although the probe took pictures from closer distances, you will still have to wait for them. NASA scientists have estimated that they have so far picked up about 1 percent of the. Data collected by New Horizons. 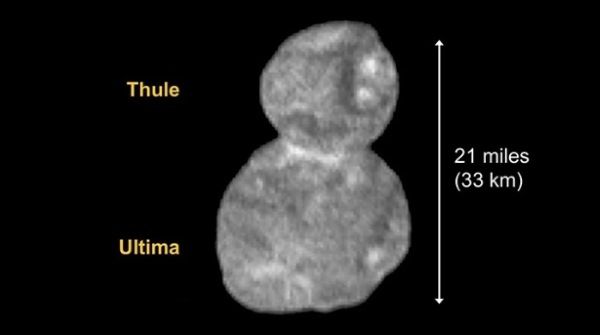 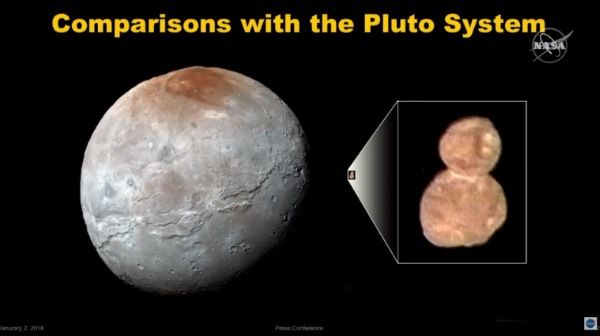 Such a distant orbit of Ultima Thule makes the object very interesting for astronomersow. At this distance, the sun is as bright as the full moon on Earth, so temperatures aren’t high either. All this makes the Kuiper Belt objects can be treated as a kind of time capsule.

The probe will screwotce will be behind the Sun, which is why scientistsow awaiting a break for about a week in data transmission from New Horizons. Data again should start arriving on January 10, and it could take up to 20 months to receive the entire package. – Those of us whooers are working in a scientific team, looking forward to new data – admitted Stern.

The New Horizons probe was launched into space in January 2006. Her goal was to take measurementsow and study of Pluto and its moonow. This goal was achieved in 2015. The second of the targetow is to study one of the objectsow located in the Kuiper Belt, or Ultima Thule. The end of the mission is scheduled for June 2022, but if the probe is in good condition, the mission could continue.