At the end of December last year, a bolide entered the Earth’s atmosphere and exploded with the power of 173 kilotons of TNT. However, traces of the space rock intrusion were only spotted last week, even though it was the third strongest meteoroid explosion in more than 100 years.

On December 19, a meteoroid exploded over the Bering Sea off the coast of Kamchatka. This event, however, went virtually unnoticed. Peter Brown of Canada’s Western University found traces of the explosion in at least 16 infrasound monitoring stations around the world. It’s a global network designed to monitor the planet for atmospheric outburstsow.

The powerful explosion had rown value of 173 kilotons of TNT. That’s about 10 times the energy of a nuclear bomb explosion, whichora exploded in Hiroshima. This is also the third strongest meteoroid explosion in more than 100 years – After the 2013 explosion in Chelyabinsk (440 kilotons) and the 1908 Tunguska disaster (at least 3 megatons).

It is certainly the remote location of the bolide’s intrusion into Earth’s atmosphere that caused the event to go unnoticed. However, traces of the explosion appeared in data from US satellitesoin the military, ktore detected visible and infrared light from the bolide. In addition, a trail of smoke was accidentally captured by the camera of Japan’s Himawari-8 weather satellite.

Based on satellite data, NASA scientists calculated that the space rock entered Earth’s atmosphere at a speed of about 32 km/s, at an angle of 7 degrees and exploded at an altitude of 25.6 km. Based on data from infrasound monitoring stations, Brown calculated that the meteoroid had a diameter of about 10 metersow and a mass of about 1,400 tons. 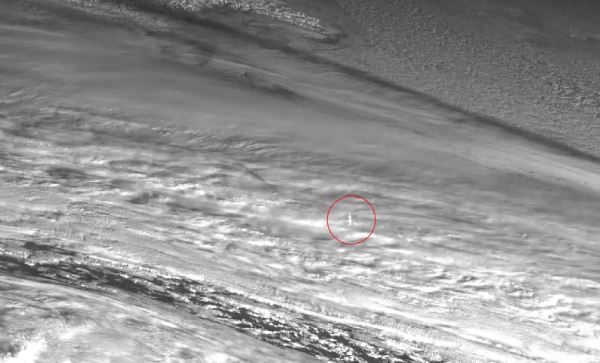 It is estimated that millions of meteoroidsow enter the Earth’s atmosphere every day. The vast majority of them are small and burn up on entering the atmosphere, but there are also some larger rocks. NASA’s Lindley Johnson said in an interview with the BBC News service that objects as large as the one last December or the one from Chelyabinsk in 2013 enter our planet’s atmosphere 2-3 times every 100 years.

Since 1988, NASA has registered 774 bolides, whichore entered Earth’s atmosphere. Most of them, like the one thatory exploded over the Bering Sea, went unnoticed because these events often occur over oceans or sparsely inhabited areas of the.

Hi, fantastic post on the meteor.
I quickly checked MODIS-Terra. they seem to have had a pass roughly at the right time (incredible coincidence!). I cropped the 250m res below or check the link.https://t.co/JJskoBkPFL pic.twitter.com/ctgB9yEcsy